Give WHAT for Christmas?!

​Those who know me well will know that I get crazy ideas all the time - but of all my crazy ideas, this has to be one of the craziest, and until today, one where I didn't know if it would work or not.

When I committed to raising another $25,000 for Pencils of Promise before the end of the year, I signed an MOU with PoP, so this is serious stuff!

For the last two weeks, I've been talking to a number of parents about a Christmas campaign where kids and parents would agree to give up their Christmas presents so that another child can have a chance to go to school for a year.

While I did not expect all parents to agree, I certainly did not expect the vast range in responses that I got from different parents and the surprisingly high amount of resistance to the idea.

But thanks to a brave little 5 year old girl called Lucy Su and her wonderful parents (Valerie and Timothy),  I was able to get my hands on some video footage lasat weekend and put together the first GiveWHATforXmas video.  And thanks to the incredible June Tan, who's enthusiasm has keeping me going despite all the skepticism for this Xmas campaign, I spent the weekend making another two incredible videos with an 11 year old girl and a 13 year old boy.

Anya (the girl) was excited and enthusiastic about making the video.  Asher (the boy) was a bit more skeptical - he wasn't very keen on doing a video and did not want his face to be filmed at all, but when it was his turn, he knew exactly what he wanted (memes! Except we didn't have any memes! Shucks!)

Both were also confident that they were going to raise enough money to put 50 kids through school and were extremely enthusiastic about wanting to give education for Christmas, which was truly inspiring.

Attaching the three videos made so far for your viewing  pleasure!

Give WHAT for Xmas? from Deborah Kay #debbiediscovers on Vimeo.

I now have 6 kids in my campaign and am still hoping that more parents will join us. I'm also hoping that parents I don't know - parents from all around the world will join in this campaign! Each one of the kids have set a target of $100 and most have achieved that target already.

All you need to do is commit. For many parents, the fear of committing to a fundraising target, is likely to be the primary prohibitive force.   But think small.  Remember $25 puts a child through school for one whole year.  If you have 4 grandparents to ask, that's already $100!  Easy!

"Empathy is at the heart of what it means to be human." -  says study on How Parents can Cultivate Empathy in their Children, Harvard Graduate School of Education.
Empathy is also a core tenant of Danish parenting and is proactively taught from pre-school - like English or Math.  As a result, this is often cited as a reason why the Danish have happier adult lives.
​
According to the NYTimes' parenting blog, the Harvard study gave 5 recommended tips to teach empathy:

1. Empathize with your child and model how to feel compassion for others
2. Make caring for others a priority and set high ethical standards
3. Provide opportunities to practice
4. Expand your child's circle of concern
5. Help children develop self control and manage feelings effectively

So while parents may be concerned that their kids freak out at the thought of having to give up some of their Christmas presents, it's ok let them freak out, but take this opportunity to teach them bout the less fortunate, and allow them some time to realise how fortunate they are.

You should see how excited my kids are each time they get a donation and they realise that they put another child through school for another year.  Doing such "good deeds" triggers the natural release of Oxytocin and so any person or child would naturally feel good, high, making it easier to teach and reinforce the notion of empathy.

I hope that parents and kids will be inspired when they see these videos.  I certainly am.

Make a video like Lucy, Anya and Asha.  It's great practice for video storytelling!

I'm putting together a kit of fundraising letters, thank you letters, that will be shared with anyone who joins the campaign.

If you have any questions about my GiveWHATforXmas campaign, please reach out on any of social media channels or my contact details on the about page!! We would love to have anyone from anywhere around the world join us!  And you don't have to give up ALL of your presents!
​
NOT JUST FOR KIDS
Anyone who wants  to make a donate in honour of their friends or family can do so -  I recently made a donation which I dedicated to my parents.


So I made a donation to my sister's kids as a Christmas present, while honouring my parents (their present) and my sis is doing the same and we're all done for Christmas!

​YAY! Note this is not just restricted to kids - anyone can join!

RESULTS OF OUR CHRISTMAS FUNDRAISING: $4,462 raised!

Check out our mobile app on the left (made with impressed.ly's very impressive app making platform - a very clever and very smart looking mobile web maker that can intelligently design itself based on your Facebook page images.

And another microsite made with Adsy on the right - another free and super easy to use platform though it doesn't have the same mobile app feel to it.

All in all, our Christmas Campaign resulted in about $4,462 in funds raised across 6 kids!!  OK so Christmas didn't get another$25,000 but almost $5K is not bad at all considering the battles I had to fight to get these kids to participate!

We even designed and awarded some Christmas Scholarship Certificates!! Made in Canva of course! :)

This is where I learnt the real secret of fundraising. Right when you least expect it, when everyone is still warm and fuzzy from Christmas, we were told that on 31 December 2015, for 24 hours only, Windows would match all donations $1 for $1 for the entire 24 hours.

Boy did that shake things up!

Thanks to my super-hero parents and their super generous friends, we managed to raise about $20,000 on that day only to be told that Windows would continue donation matching through 1 Jan 2016!

By the end of that 48 hour period, we had raised  an unbelievable US$42K! in 48 hours!! Even after Windows stopped their matching (I got the last of their donation matching), we still had donations pouring in!

The secret is - no one can say no when they think they're doubling their donation - but you have to keep it urgent. 24 hours only. Everyone loves a 2 for 1 deal!

It was so special I even made a 2X Impact pop-site (ok don't be jealous Weebly) with real SVG animation and scroll code! Check this out!
​ 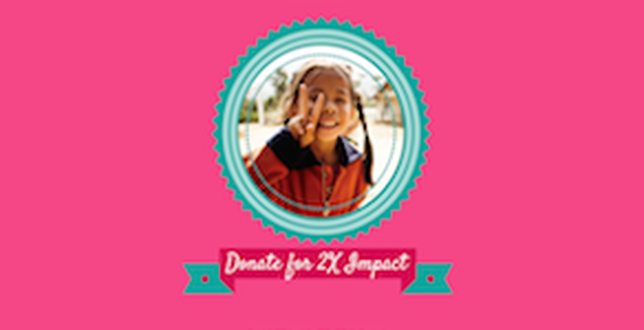